Since version 5 ATENA includes a new product ATENA Studio, which brings the run-time control and post-processing comfort to a new level, which surpasses the high standard that was previously introduced by our ATENA Engineering 2D & 3D software. In version 5, there is no need to import results to GiD for post-processing.

The key ATENA v5 features are:

The new release of ATENA software, version 5.3 brings you many new exciting features:

(a) Improved robustness and validation of ATENA software for seismic and dynamic analyses. The dynamic capabilities of the new ATENA version has been tested to improve the program efficiency and robustness for analysing seismic problems. ATENA can be used now to perform static pushover analysis as well as subjecting the structure to the ground motion and evaluate its behaviour under this complex scenario using all available nonlinear models for concrete, masonry, steel or interfaces. The Fig.1 shows the program response in the two storey building experiment performed at ISPRA during the ESECMaSE project. See video here.

(b) Support for the new Austrian tunnelling method is included in ATENA Science now. The user can define the activation or removal of parts the structural model to simulate the various construction cases. The redistribution of the forces between the removed parts and the new ones can be controlled through user defined parameters.

(c) Improved 3D beam elements increase the program efficiency in handling large scale models of multi-storey frame structures such as high rise buildings. The 3D beam elements can be used in combination with shell and/or solid elements to create efficient models for large scale analysis of frame structures. In the ideal approach, the bending elements are modelled using these special beam or plate/shell elements. The beam-column joints where shear failure mode can be expected should be modelled using solid elements. Similar modelling approach can be also used at the column-plate connections, where the punching failure mode should be verified by a finer model with solid elements (Fig. 3). The ATENA beam and shell elements can be easily combined with solid elements such that the most comprehensive, accurate and efficient approach could be use for checking your structures.

(d) Improvements in ATENA fatigue model for effective simulation of high cycle fatigue of concrete in tension. This fatigue model has been further improved to increase its robustness. The basic idea of this model is to simulate the effect of high-cycle fatigue, but using only a limited number of cycles. The model of your structure is subjected to several load cycles. Each cycle effectively represents several hundred or thousands of cycles, and the corresponding damage is calculated based on this information. This unique approach enables efficient evaluation of the fatigue damage as well as the damage distribution during the loading process. Have a look for yourself at Fig.4, how this fatigue model was used to analyse the fatigue strength of a carbon fibre sheet connection to concrete.

(e) Parametric definitions are now supported in the input/command file. In the new version of ATENA, it is possible to introduce mathematical operations, define and assign values to variables. This can be effectively used for batch processing and parametric definition of the numerical models for various parametric studies. See Fig.5 for a glimpse of the new parametric input in ATENA command file.

(f) Extrude meshing option in ATENA 3D. This very interesting new feature in ATENA 3D extends the type of macro-elements/regions for which brick elements (hexahedra) can be used. Any macro-element, which contains two opposite topologically identical surfaces, can be automatically meshed with brick (hexahedra) elements, which simplifies the modelling and increases the accuracy. Such macro-elements/regions are for instance typically created by the extrude operation (See Fig.6).

(g) Probabilistic module SARA/RLACS is available now also for ATENA Science. Any value in the ATENA  input/command file can be selected for randomization. The advanced probabilistic methods of FREET such as LHS, FORM, correlation matrix, simulated annealing can be used to perform accurate reliability prediction using the elite nonlinear models of ATENA. This totally new module is documented on the Fig.7 showing the full probabilistic evaluation of the design strength of a long-span (18 m) reinforced concrete girders with large openings. 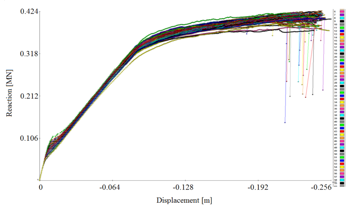 We strongly support our users in their analytic work with ATENA. Support is mainly provided by email and phone calls. The solution to many questions can be found also in our FAQ & Online Forum. New versions of ATENA are released every year.

Maintenance is provided for free for one year after the software purchase. After that is it can be prolonged at annual rate coresponding to 15% of the program price.