Final lining of the double-track railway tunnels (Fig. 1) was designed in both reinforced and plain concrete. Since the application of unreinforced concrete for tunnel lining is rather novel in Czech Republic, the lining design was supported by nonlinear finite element analysis.

Design of the plain concrete tunnel lining was supported by nonlinear finite element analysis. For the analysis the commercial software package ATENA was used. This is a well established finite element program for realistic computer simulation of damage and failure of concrete and reinforced concrete structures. In ATENA special constitutive models for concrete are employed:

·Tensile behaviour of concrete is modelled by non-linear fracture mechanics combined with crack band method and smeared crack concept. A real discrete crack is simulated by a band of localized strains. Tensile softening (i.e. drop of tensile stresses after crack initiation) is assumed in an exponential form and is driven by fracture energy consumption.

·Concrete in compression is covered by special theory of plasticity with a non-associated flow rule and compressive softening damage. It can reflect influence of lateral stresses to the compressive strength, so called confinement, which can play an important role in 3D and plane strain situations. 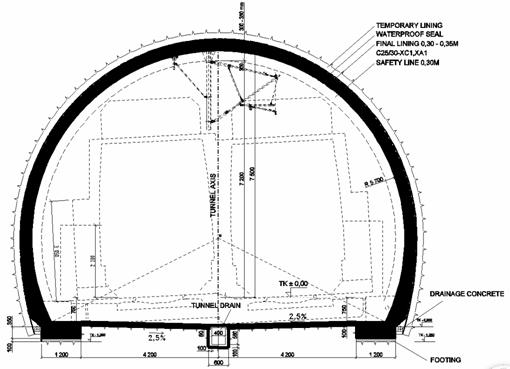 The efficient numerical solution of the structural model in ATENA is accomplished by user-friendly graphical environment. It supports preparation of input data for the nonlinear finite element analysis, enables real-time graphical tracing and control during the analysis, and allows an efficient evaluation of results. In particular, the graphical post-processing can show cracks in concrete with their thickness and residual stresses; realistic crack patterns can be obtained. All the important values from the analysis (strains, stresses, deflections, internal forces, reactions etc.) can be represented graphically as coloured iso-areas, diagrams in defined cross-sections, or in form of vector or tensor arrow plots. In addition to the usual finite element results, engineering integral forces (i.e. bending moments, normal and shear forces) can be calculated and plotted.

A tunnel section of 1 m length was modelled in ATENA 2D in plane strain state. External diameter of the upper tunnel tube was 6 m. The structure was supported by springs around the tube and under the abutment; spring stiffness was derived from ground properties. Various lining alternatives were considered and analyzed: concrete shell thickness of 0.300 m or 0.350 m, plain or reinforced concrete, without or with a bottom vault. An alternative with fixed abutment has been analyzed as well. The tunnel structure was loaded by dead load, creep and shrinkage, temperature in summer or winter conditions, and ground pressure. All the desired load combinations were calculated and evaluated individually, since superposition of the load cases is not possible in the nonlinear analysis.

Material properties for the concrete tunnel shell were considered in three alternatives, since requirements of the codes had to be proved:

The nonlinear finite element analysis performed with the realistic material values simulated expected real structural behaviour. From the calculated overloading compared to the design values global safety of the structure was assessed. The calculation with characteristic values was used for serviceability limit state evaluation (crack width, deformations, abutment safety). In case of the analysis with design values the loads were enlarged by load partial safety factors. Results from this calculation were used for verification of the ultimate limit state in M-N interaction diagram.

As example of graphical outputs from the ATENA nonlinear analysis are presented several results for the unreinforced lining of 0.300 m thickness, without bottom vault, with spring supported abutment, in the load combination B – dead load + creep and shrinkage + temperature in winter. Crack pattern for the ultimate limit state with a detail of the main crack in the upper vault are shown in Figures 2 and 3. Bending moments and normal forces along the cracked tunnel lining are drawn in Figure 4.

Fig. 3Detail of the main cracks in the upper vault with crack widths description

Fig. 3Bending moments and normal forces along the cracked lining

Unreinforced tunnel lining was designed with support of nonlinear finite element analysis using ATENA software. Both these methodologies, i.e. tunnel lining made from plain concrete, and nonlinear analysis based design, are rather novel, at least in CzechRepublic. The presented combination of them was very successful and represents an accomplishment and extension to the usual design procedures according to codes.