The model has been tested during the low pressure tests (LPTs) followed by proof test (PT) and integrated leakage rate test (ILRT) during commissioning. Further the over pressure test (OPT) has been carried out to establish the failure mode of BARCOM Test-Model.

The outputs recorded at these sensor locations during the test along with the pre-test predictions by various registered participants will help to assess the over all test data collected during the various phases of the experiments. With this International Round Robin exercise, it has been possible to predict the ultimate load capacity of the BARCOM test model and understand the overall global and local failure modes.

Thus the PHWR containment structure performance evaluation for extremely low probable beyond the design basis accidents can be made for the public acceptance of Indian nuclear power plants. 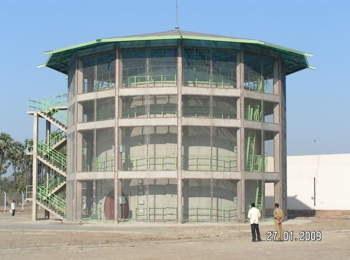 ATENA numerical model efficiently combines various finite element. Walls and dome are modeled by special three-dimensional layered shell elements, which allow a significant reduction of the model size, while maintaining very good approximation of the stress state. The vertical ribs and the ring for anchoring of prestressing cables and the foundation slab are modeled by high order solid elements. Two types of models are used for reinforcement. Ordinary non-prestressed reinforcement is modeled by smeared reinforcement and for prestressing cables discrete bar elements are used. Altogether the numerical model consisted in this case of 17031 elements, which made it possible to perform a global containment analysis in reasonable time with sufficient accuracy.

The analysis was performed for a test under increasing internal air pressure up to failure. In the first 10 steps only dead load is applied to the model. In the subsequent 10 steps, the pre-stressing is applied as an initial strain in the tendon cables. The final initial pre-stressing load is 80% of 26.6Tons/cable. This pre-stressing is applied as an initial tendon strain of 7.6‰. After that an internal pressure is gradually applied on the interior concrete wall. At this point the solution method is changed from Newton-Raphson to Arc-length. The internal pressure is being gradually increased up to the level when the pre-stressing tendons start to rupture.

At the end of pre-stressing minor micro cracks appear at the locations with high stress concentration. This is just below the ring and at the location, where the wall is connected to the foundation slab.

Subsequently the model is loaded by an inner pressure, which simulates the proposed pressure test. During the pressure loading the containment remains largely in the elastic domain almost up to the pressure level of 200% Pd. Up to this load level only minor concrete cracking is observed near the ring as well as at the bottom parts of the wall, near the widening of the bottom wall parts. A significant crack growth starts at approximately (240-250% of the design pressure - Pd). At this load level significant horizontal cracks appear in the ring and at the bottom of the wall and vertical cracks in the mid of the containment wall. The first load peak is situated in step 46 (260% of Pd), when a quick grow of radial cracks is evident in the model. The radial cracks start to propagate from the bottom part of the containment wall. In the subsequent steps the radial crack propagates through the whole height of the wall. In approximately 275% of Pd the tendon yielding starts. The ultimate load capacity according to the axi-symmetrical analysis is reached at the level of 320-350% of Pd (i.e. the pressure of 0.4946 MPa). At this load level the vertical tendons at the bottom of the wall reach their strain elongation capacity and may start to rupture.

The ultimate load capacity according to the three-dimensional analysis is reached at 329% of Pd (i.e. the pressure of 0.4648 MPa).

Nonlinear analysis is a useful tool for safety assessment of nuclear containment structures. In the modern design approach, it is becoming a standard procedure to verify the structural safety by a nonlinear simulation. The nonlinear simulation is a global assessment approach, which requires an application of global safety formats.  Such formats are now becoming available in modern design standards such as for instance Eurocodes or the new model code from fib (fib – model code 2010).

ATENA software supports these modern design approaches, and has been specifically developed for the analysis of reinforced concrete structures with strong emphasis on easy and robust modelling of reinforcement.